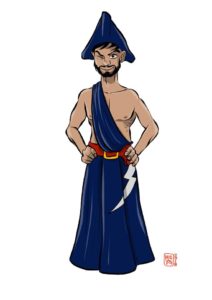 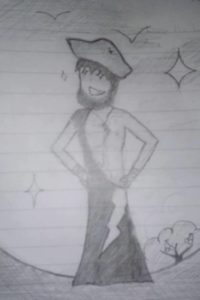 Belry as he sees himself

Belry is the resident naturalist of the group.

Belry has not always been the 1st apostle not even the 2nd or 3rd.
No…
Before he collected his numerous titles; before he became head of the church of Bürri; before he was the hero of renown that he is now; he was simply Belry, Wizard (Grade 8).
His father was a wizard, and his father before him, and his before him and so it was inconceivable that he would go down any other career path.
Indeed, enrolled in the Grand Wizard College of *mumble mumble* that his family had worked in for generations he began his studies. Despite the pedigree and the wizardry that one might imagine ran in his blood, Belry proved to be ungifted in the more practical aspects of magic able only to perform simple prestidigitations. He resigned himself to the more mental aspects of arcana and became a research wizard. His father was severely disappointed.

As a research wizard he would occasionally venture away from the musty world of books and inscriptions to visit, or even search for, sites of magical importance. It was on one of these journeys, to the supposed site of an ancient and long forgotten coven of pagan wizards, that Belry hoped to find something that would finally bring him his father’s acceptance.
However, being a long forgotten coven site, it proved somewhat difficult to find, lest it not be “long lost” as Belry mused. Lost deep in the forests and with inadequate supplies Belry resorted to scavenging what food he could find, including some wildly hallucinogenic berries. With his empty stomach now full of psychoactive fruit, he saw Bürri, Glorious Lady Of The Bush, resplendent in all her holy bushiness.
He felt her lay a hand on him and heard, no; rather, he felt her voice all around him, much as the breeze sways the bush.
“Belry” She proclaimed. “Thou art my chosen soul. You cannot fall here for you must spread my holy word.”
He was overjoyed. Not only had he been saved by a holy (and, quite frankly, smokin’ hot) goddess, but he had been chosen too. Blast it to those damned, long-dead pagans! Now his father would be proud of him.
“Oh, chosen soul” his lady intoned once more. “Pray, follow my guardian. His name is Haldr Of The Yarn and he shall guide you to safe lodgings where you may recoup.”
Haldr had, for some reason, taken the form of a small tabby cat and looked curiously at him; probably to put him at ease! What human mind could truly comprehend the true shape of the divine?
Belry did follow the feline and shortly Haldr brought him to a small village where he was given rest and food. It was here, in this small, sleepy village, that Belry cast away his former identity as a wizard (Grade 8) and took the mantle of Belry, 1st apostle.

His father is still disappointed.