Growing up poor on the harsh side of the tracks, a teenage Karen found her love for valuables and jewels could get her a long way. Eventually, one of Karen’s first boyfriends (Jason Florentino) introduced her to his family. At that point, her descent into a career criminal was complete. 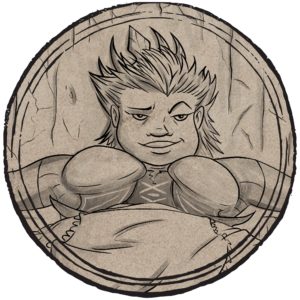 Rolling around (in many ways) with several of the Florentino family brought Karen wealth and confidence. She would regularly get drunk, marry one of the Florentino brothers and commit serious crime. Then sell him down the river for the reward money, divorcing him in the process before repeating the same sordid affair over and over again.

Always refusing to remove any previous married name from her past, the drunken Karen then married a passing trader known only as “Lebowski”. He also disappeared into the night.*(rumour abounds that Karen killed him for his tobacco supply)

During one of these many affairs Karen fell pregnant. The father, Karen claims, is Mick Florentino, and Karen gave birth to Tyler Lebowski. He is a hulking lump of a child who grew up to be one of the most mediocre players in any sportball team.

Karen, not one to accept Tyler’s failings, got drunk on prison hooch. She then decided to punch another mother at a sportsball event. Breaking her nose and stealing her necklace before attempting to swallow it as she was arrested.
This being one of Karen’s many many arrests, it was deemed that she needed a tougher, more substantial jail. Somewhere she had less notoriety. She was then shoved into a wagon bound for the next continent over.

Now free from her captors, Karen plans to return home, find her son and maybe even another baby daddy.