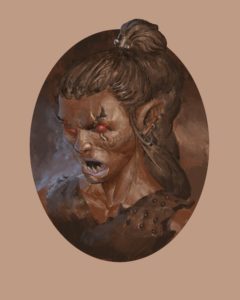 The Unnamed Rogue, a commission piece, as re-imagined by the amazing @RosenborgArt on twitter

Our fiery and detached rogue had a mix of a painfully normal upbringing with weirdly radical ideas. Raised primarily by her orcish mother, the family lived near a rural farming village where her father was the local skilled handyman. The village ‘school’ was something her father fought for her to go to, that whether she stayed in the village or found another home she would be able to read. He also wanted her to be able to follow the basics of various local religions to help protect her.

At home, she learned from her mother. Not much housekeeping, cooking and sewing (beyond the very basics) were in those lessons but rather the less romantic but more useful skills such as hunting, butchery and self defense. Setting snares was a much hated task – it always seemed cruel to her to not kill the prey outright.

She absorbed many orcish traits without realising these were unusual to their human neighbours. Namely, a joy in physical movement and a drive to be involved and dynamic to a degree much despised in the other young village women. This lead to her being semi isolated and encouraged moving unobtrusively to evade notice and comments. Except during games, the young rogue was actively sought out for team type games due to her dexterity and particularly to surprise opponents from other villages. They tended to underestimate the somewhat robust young girl, whose partial orcish ancestry was only noticeable in her teeth and green tinges to her skin in decent sunlight. Until she surprised them by barreling past or snatching the ball almost from their fingertips.

At 16, her mother quickly became seriously ill and died within a few months. After that winter, her father persuaded her to take the news to her maternal grandparents. While they grieved their daughter’s death, they struggled with the human side of her daughter. The gentleness, playfulness and fierce defense of her parents’ choice made her an oddity to them. In turn, she struggled with their different view of the world and morality. Most difficult to accept was the realisation that they shared a ‘might is right’ philosophy she had rebelled against at home. Despondent and uncertain, she went home to her father but was unable to settle. She found some solace in helping her father find a new routine without his wife.

Career & Life as a Rogue

Taking her father’s advice once more, she set out to travel and develop her own way of living in a mostly human world. Orcish talents in sneaking and use of weapons made being a moral mercenary the obvious choice for her. Finding acceptable work was a huge challenge, but she persevered to send money home to her aging father. After he also died, she was free to be more choosy about her employers. Preferring to work alone or in a small group, she varied between being a bodyguard for travelling merchants, spying for paranoid guilds and escorting religious figures on journeys.

Many of her employers disapproved of a woman being in this profession but few argued with her competence and her appropriately sneaky revenge is to teach any other women in the group (especially daughters) how to use knives and defend themselves. When she catches anyone being sexually violent are executed – with no exceptions. This then frequently leads to her leaving work suddenly, without savings or recommendations. Her natural talents allow her to survive as a rogue between periods of formal work and usually keeps her out of trouble.